Back to the same

It seems that nowadays there are more cancelled prizes, declared as void, etcetera, than awarded. And it always revolves around the manipulation issue.

Luis Valtueña’s contest first prize revoked because of the manipulation made to one of the photographs.

Editorial Department. Médicos del Mundo (Doctors of the World) has finally decided to declare null and void the first place given to the Italian photographer Francesco Cocco for his article about Afghanistan, awarded in the thirteenth edition of the Humanitarian Photography International Award Luis Valtueña.

Through a rather plain press release, the jury mentions the non-fulfillment of the award’s rules –specifically point 4, which refers to photograph alteration- as an argument to revoke the award.

In spite there are no more details given, weeks ago one of the photographs in this article, -one where several women covered by a “burka” can be seen-, was being questioned. The first suspicions arose when some observers, alien to the contest organization, stated that the image seemed to have been manipulated, in particular to clone one of the women. 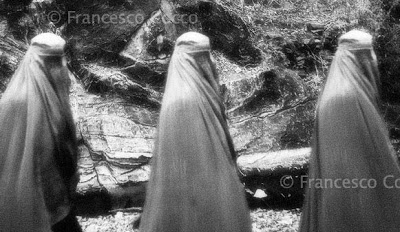 Curiously, this same work by Cocco has been awarded this year at China International Press Photo Contest.

Doctors of the World has also informed about its decision declaring the first prize null and void, and cancelling the grant that was given to the photographer in order to develop a project in collaboration with this non governmental organization.

More information about this news:

The question that appeals to us is if we are ever going to realize this is a lost battle, because of the simple reason that the juries do not have either good or solid arguments to stand up to their decisions.

I keep on thinking about the war against drug traffic taking place here in México. It’s the same idea. Instead of taking in consideration that drug problem is not solved by prohibiting them, but by rehabilitation and education. The image manipulation issue should be perfectly acceptable, under certain circumstances. But those circumstances are the ones the organizers of these contests, do not dare to define.

In this award winning photo’s case, I consider irrelevant that it was manipulated, more important is that I think it is a bad photo. And if the jury didn’t realize about the rough manipulation, meaning: bad image quality, then, those who we have to question are the members of the jury and not the photographer.