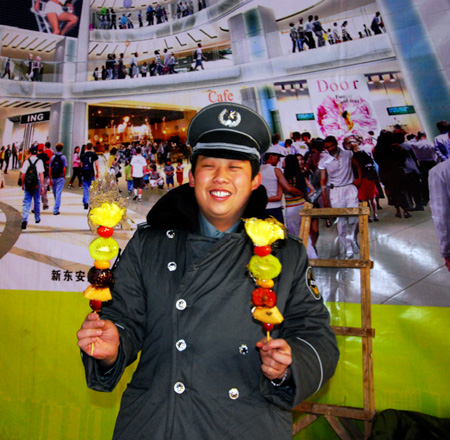 This morning I read in the Mexican newspaper, Reforma that the Chinese government just announced the construction of a new automobile factory in Mexico. This is at a time that other car manufacturers, the world over, are falling apart.

What this tells me is that the misfortunes of some does not need to be the same for everyone else. In fact the Chinese economy is growing, notwithstanding the reduction of their own export market to the rest of the world, and they are doing so at a pace of around 6.5% of GDP (Gross Domestic Product) by stimulating their own internal markets. There is one fundamental difference to what is happening in the rest of the world: their stimulus packages are financed from within, with their own reserves, whilst the US is financed mainly by the Chinese.

Just make a projection on to the future, and consider that when the worldwide recession comes to an end, the Chinese will not only have grown considerably more than the West, but will not have any substantial debt to deal with. Much of the western nations will have to slowly pay back their accumulated debt, and to work down the reduction of their huge deficits, which will take at least a decade to resolve. I will call this the “lost decade” (lost to the Chinese, of course).

I recall when the digital era just started, and we were working with Photoshop 1 and 2, I had a colleague who for some time had been making my contact sheets. This was just at the end of the analog era, and the beginning of the technological changes related to a change of paradigm in photography. Jonathan Reff, started a business as a consultant to photographers who wanted to learn about all the new tools of the digital era. Among them was one photographer who was probably at the time the most important photographer to the auto industry.

His pictures were legend, in so far as all the efforts that went into making the perfect picture at the right time during the sunset overlooking, for instance the Pacific Ocean from Malibu beach. The fees for such pictures would run into the triple digits. The images were made with 8 x 10 view cameras using of course film. The production of such images required a field of assitants, lights, and a slew of cars, like a big Hollywood production.

Jonathan would suggest to this photographer that he should start looking into the digital age and how the production of the images for which he was so well known, and for which he almost had a monopoly in taking such specialty pictures, could be made much more efficiently. Unfortunately, he felt he did not need to bother, that what he was doing could not be done any better, thus he only paid marginal attention to Jonathans’ recommendations.

He simply forgot that there were a lot of other photographers who were keen to exploit this opportunity, and offer the same images for a third of the price, because they knew how to do it. Jonathan’s client unfortunately never followed through on his recommendations, until it was too late. He lost the business and subsequently went broke. This happened in the early nineties.

Interestingly enough, two of the clients of this photographer were General Motors, and Chrysler. They in turn never got the message either, and produced cars much as this photographer made his pictures. Huge production expenses, and no sense for the changes that required a new vision.

I bring up some of these issues, because all too many photography schools in the world, are still preparing future photographers with the technologies of the analog era. I don’t have any problem what so ever with people having a preference for old methods of production, provided that they are actually aware that they will not be able to compete in the marketplace. But if you are going to school to learn about preparing yourself for the future to make a living, you better be aware that the world is changing as you read these words.

Yes, photography is not only utilitarian, but a tool for artistic expression as well, or vice versa. But even the most recalcitrant of colleagues who sees him or herself solely in artistic terms and sees the world in a very traditionalist way, will have to acknowledge that the distribution of their work will inevitably be linked at some point in time, with the new technologies with which to distribute, or even produce some of their work. Even people who do finger-painting, can be found to use the internet to show off their creations.

The “lost decade”, does not need to happen to you.